How an Eeyore became a Pooh...

Who doesn't like A.A. Milne's classic tales of Winnie-the-Pooh!

I grew up reading the books, and then we read the books to our daughter as she was growing up. And then there were the cartoon movies, and the toys, and...and...and. Well, you get the idea. Bottom line...they are classics and so are the characters.

Who can forget Winnie-the-Pooh, Christopher Robin, Piglet, Eeyore, Kanga, Roo, Rabbit, Tigger (my personal fave!), and Owl. They were all so endearing -- and for our purposes here, very instructive.

This came home to me a couple of years ago when a co-worker mentioned, in an 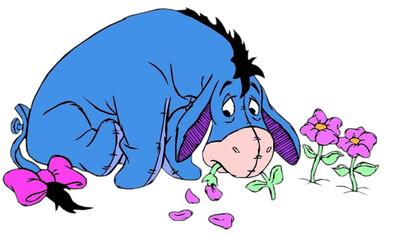 offhanded sort of way, that I was "Eeyore-ish." At the time it struck me as a little odd and I sort of brushed it off -- sort of. Frankly, it stuck with me and has caused me no small amount of introspection ever since.

Eeyore-ish? What in the world does that mean? And do I even want to be an Eeyore?

Thinking back, I realized Eeyore was the always pessimistic, sarcastic, 'got-a-cloud-over-me,' glum-bum,surely depressed, old, grey, stuffed donkey friend of Pooh's. He was predisposed to loosing his his tail and lived in a house house made of sticks, which was predisposed to falling apart and constantly needing to be rebuilt. (Would you be surprised to know it is described on the map of the Hundred Acre Wood as, "Eeyore's Gloomy Place: Rather Boggy and Sad"?) Eeyore is also known for his catchphrase, "Thanks for noticing" which he is always applying to himself. Oh, and did I mention Eeyore's favorite food is thistles?

The more I thought about it, the more I realized...I am a little Eeyore-ish, and maybe not just a little bit! And the other thing I realized is I don't want to be that way. I would rather be much more Poohish...

Winnie-the-Pooh, is endearingly naïve and admittedly slow-witted, but he is also friendly, thoughtful, steadfast and sometimes even insightful. He is genuinely kind-

hearted and is always willing to be a help to his friends. Pooh is very social and is often out visiting the other animals in the wood. He is also considered to be quite the talented poet. Though humble and aware of his slowness, he is comfortable with his creativity and giftedness and often sees it as a way of entertaining and encouraging his friends...or at least getting a bit of a snack. And without a doubt he is very fond of a snack! He is unreservedly and unapologetically fond of food, especially "hunny," for which he will do almost anything!

In a word, he is joyously comfortable in his own skin -- and an ever-faithful friend to Eeyore, who basically repays him with disdain.

So, Eeyore or Pooh? Who do I want to be like? Without much unnecessary consideration, I definitely choose Pooh!

But how can an Eeyore become a Pooh?