I meet with a couple of guys every few weeks to encourage one another. We have decided that for our next consideration we are going to start a new consideration on what it means to lead. We'll be using a book called The Ascent of a Leader: How Ordinary Relationships Develop Extraordinary Character and Influence by Bill Thrall, Bruce McNicol and Ken McElrath as our reference point for discussion. It is really a very insightful study on the contrast between this world's "capacity ladder" and a grace-based, "character ladder" approach to increasing our leadership impact.

So many things in the book have had a positive influence on my viewpoint of leadership, but the following quote was so valuable in terms of how we look at ourselves in the midst of it. My spiritual DNA has a considerable dose of "I'm nobody!" theology 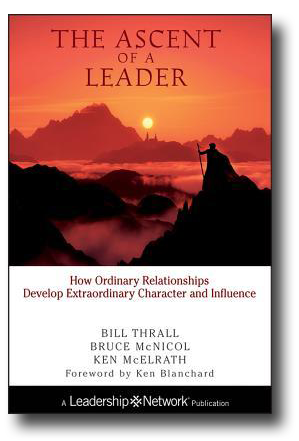 interwoven into it, so this section was particularly helpful for me in understanding what true humility is -- "not as worthless people, but as people who are willing to present all our strengths, talents, and influence to the strong hands of a loving Creator..." I hope it encourages you as much as it encouraged me.

Just as proper understanding of the Creator's nature and authority can encourage trust, improper understanding can hinder our trust. Some people assume that learning about God's bigness necessitates negative obsession with their own smallness. You might hear them say things like "I am not valuable" or "I have nothing to offer." Such statements do not honor the nature and authority of God; they demean it. After all, the Creator called creation good, including humans. Such negative self-statements only reveal a genuine lack of ability, a poor self-image, or a false spirituality.

One day a rabbi, in a frenzy of religious passion, rushed in before the ark, fell to his knees, and started beating his breast, crying, "I'm nobody! I'm nobody!"

The cantor of the synagogue, impressed by this display, joined the rabbi on his knees, saying, "I'm nobody! I'm nobody!"

The custodian watching from the corner, couldn't restrain himself either. He joined the other two on his knees, calling out, "I'm nobody! I'm nobody!"

At which point the rabbi, nudging the cantor with his elbow, pointed at the custodian and said, "Look who thinks he's nobody!"'

God has no desire for us to belittle ourselves in a false humility. Instead, our acknowledging God's nature creates genuine humility. When we come face-to-face with the strength of God -- not as worthless people but as people who are willing to present all our strengths, talents, and influence to the strong hands of a loving Creator -- we demonstrate our trust in God's nature and authority. Sure, we bring our needs and weaknesses too, but trusting God with who we are has nothing to do with demeaning our personal value. Trusting God has to do with accepting who God is and accepting who we are in the context of God's plan. It has to do with receiving the protection we need to trust others. Entrusting ourselves to God is the essence of the biblical understanding of humility."