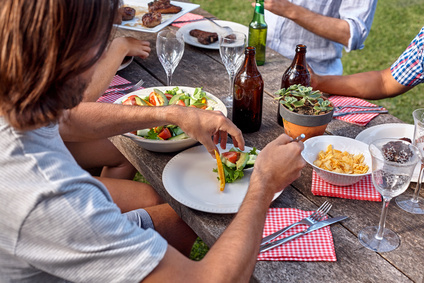 When Jesus Came to Dinner

For wherever two or three people come together in my name, I am there, right among you!" Matthew 18:20 (Philips)

Have you ever taken the time to read through the gospels with the sole intent of finding out what it was like to have a meal with Jesus?

It is absolutely fascinating because no matter where he was, or how many people were with him, something amazing always seemed to happen. Sometimes there was controversy. Sometimes people got healed. Sometimes there was instruction. Sometimes comfort and encouragement.It wasn't always the same, and it was never boring, because every time it was going to be something!

For several months now, God has been speaking to Pam and I about increasingly opening 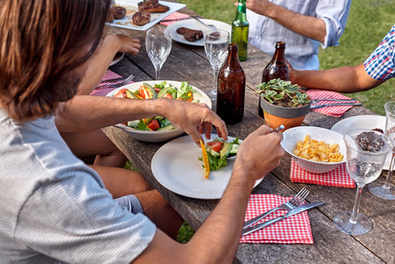 our home to be a place of safety, comfort, encouragement and refreshment to those God leads to us. And I have been burdened to host periodic 'dinner parties' that are something more than the typical 'guys in one corner talking sports, gals in the other corner talking kids' type of deal. My desire is for a time where people can get to know someone new, share their hearts and stories, and experience the reality of God's presence in our midst in a powerful way.

This all connects back to how God has been speaking to me about 'being the church,' rather than 'doing church.' For me, the being part is what takes place outside the walls of the building and beyond the order of a service. It's about how we engage and interact with others, while living out of who God says we are as new creations in Christ. It's about experiencing the reality of our connectedness in Christ and benefitting from the richness of what God is doing in and through others. Ultimately, it's about "there I am with them"-- the almost incomprehensible reality of his presence when as few as two or three are together.

Last Sunday was our first 'experiment' with this kind of intentional get-together -- and it was amazing!

There eight of us for dinner and another couple joined us for dessert. There was nothing specifically planned or orchestrated about the time. Everyone brought something to contribute to the meal, we sat on the patio, while the sun went down, and shared life with one another. There was warmth, acceptance, laughter, some serious moments of courageous sharing, and a profound sense of the Spirit's moving. We even laid hands on one person and prayed for their strength and health. And at the end of our time together, one of my friends said, "This was just like being in church...only without the singing!"

Pam and I were grateful, humbled and privileged to be part of a time where we could see the hand of God so evidently moving.

Reflecting on that time, I became aware of a few things that I want to be mindful of the next time we do something like this:

Let God determine the guest list.
When Pam and I first talked about hosting this time, we had all kinds of ideas of who would be 'perfect' to invite. That guest list was determined primarily by how we envisioned what the evening had in store. We, at least I, had some specific expectations about what I was hoping would happen and how everything would work together. And that led to who we thought would be best to include in the mix.

Then God scrambled our plans...

There were some last minute cancellations, and then that Sunday morning God put some folks on our hearts that we weren't originally thinking of. So more invitation went out. And in the end, Jesus gathered together those he wanted to have dinner with!

Resist the temptation to control the time.
I get nervous when I think things aren't going well, or at least in the way I think they should go, and my default button is to try and control things. The lesson of that evening was that if God has gathered together who he wants, then he is able to move in their midst in such a way as to realize his intention for the time. I don't have to worry about whether people will like each other, or if someone will say something offensive, or talk too long, or whatever. Instead, I can rest in God's good intentions and the Holy Spirit's ability to move in the hearts of each of us, to contribute what is necessary to make the time meaningful, enjoyable and memorable.

In essence I learned, that rather than being the host, I was in actuality a guest at a dinner that Jesus was hosting! That perspective changes everything. Instead of controlling, I can just contribute my part to the whole. Instead of fretting, I can relax and enjoy what God is doing through others. And instead of having to be the expert, I can be one of the seekers, looking to others for insight and encouragement.

Relinquishing control gave God the opportunity to guide us throughout the evening and allowed us to experience the blessing of true fellowship with like-minded Jesus followers.

Embrace the opportunity of diversity.
Different can be scary and 'dangerous'! After all, you just never know what might happen if you get people from a variety of faith backgrounds and experiences together. What happens if they start criticising each other's fellowships or doctrine? What if they try and dominate the conversation or try to convince everyone to agree with them? What if?

There is a risk whenever you leave your comfort zone and let God determine the guest list. But God owns that risk! And while different can be challenging, it's sure a lot more interesting and exciting than getting the same folks together to rehash the same old things, while carefully avoiding the 'no fly zone' topics, i.e. crossing into the danger zone of opening up and genuinely sharing what is happening in our lives.

In our case there were 5 couples around the table from 5 different fellowships and a variety of doctrinal and political perspectives -- and nobody was interested in talking about any of those things. Rather, it was the diversity of our stories and experiences that made the night special. The willingness of 'almost strangers' to open up and share how God was moving in their lives was amazing. And as a result, there were new things to consider that were refreshing and challenging; and there were huge areas of commonality in our love for Christ,' that were affirming and encouraging.

Relationships of trust are foundational.
Our intention for this time was to bring people together and trust that we could have meaningful conversations and a deeper time than a typical 'meet-and-greet' potluck. In order for that to happen, people needed to feel that they were in a safe place where it is okay to be who they are. It's challenging to create this type of environment for people who have just met each other for the first time, since most of us are usually a bit cautious and apprehensive in unfamiliar situations.

I guess what I am trying to say is that trust, openness, and transparency is contagious and can infect everyone at the table. I think it is a disease worth catching!

We've hosted countless dinners and fellowships before last Sunday, but that time was different in that I believe it was something that God wants us to do with intentionality and regularity. I don't know exactly where it will lead, but I know in some way it is building kingdom relationships among the people we know and also fulfilling God's calling in Pam's life and mine.