Who will order the birthday cake?

Several years ago my wife and I went to a local restaurant to celebrate our anniversary. The restaurant had a balcony-type second floor with booths on the wall looking out at the tables arranged next to the rail. We got seated in a booth along the wall and ordered our dinner. It was really quite a nice place and we were talking and waiting for our food to arrive, when a young couple came in and sat in the table opposite our booth.

They were obviously very happy and excited to be together. Their body language and expressions indicated this was a special day for them as well, and they ordered drinks and began to peruse the menu. 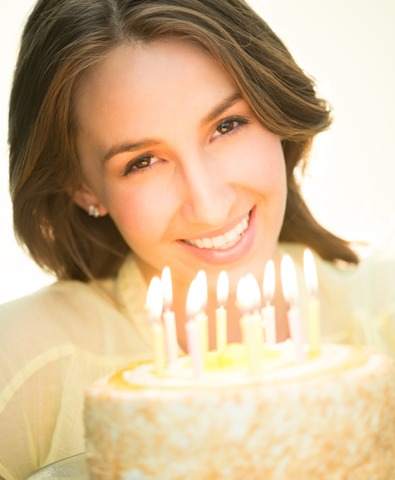 Our food came and we were having a great time talking when we became aware that all was not well at 'table 10'. It was obvious that the conversation had become a bit strained...and then a bit more strained...and then very strained. It then evolved into one of those conversations you have where your face and tightly controlled gestures are letting you 'yell' at the other person, while your voice is so low no one can hear.

Pam and I looked at one another and I said, 'Wow, this is interesting -- dinner and a floor show, who would have guessed!"

The 'conversation' reached a bit of a fever pitch and then it went where all of those types of conversations must go to maintain decorum in a public place - into ice cold stony silence. Neither of them could look at each other. Neither said a word. When the waiter came to take their order, they both gave him brief, dismissive responses and went back to brooding.

Needless to say Pam and I were completely absorbed with the drama playing out in front of us.

And then something magical happened...

The young woman got up from the table and walked down the balcony to where the servers were stationed. She engaged in a brief discussion with their server and Pam and I thought she must be asking how to get to the restrooms. But it turned out that was not her intent at all. After a brief conversation, she returned to the table and 'assumed the position,' looking silently out into space. Her date was doing his part in maintaining this icy detente, all the while Pam and I, absolutely absorbed in what was happening, were barely noticing what we were eating!

A few minutes later the serving crew comes walking toward us carrying a big piece of cake with a candle on it. Once again Pam and I are wondering who is having the birthday -- seems like this restaurant is the nexus of celebration in our community -- and began looking up and down the balcony to see which table it might be going to. But it was not going anywhere...

Without warning, the servers stop at the table opposite us, put the cake down in front of the young man and immediately break out in the birthday song. He looks at his date (for the first time in quite a while!) and there is wonder and puzzlement in his eyes. She smiles back at him and takes his hand. Needless to say the king of ice melts into a puddle of "I'm sorry's" and "I love you's". She is crying and laughing. Pam and I are stunned!

And Dan walks away with a profound life lesson in reconciliation.

Look, we have probably all been where that couple was. I know Pam and I could relate, it was one of the things that kept us captivated throughout the evening.

You know how it goes -- everything is going great, you are having a wonderful time and then something is said, or inferred, or neglected and something gets said in response, which leads to an escalation in the dialog, which eventually turns white hot and then, if you are fortunate, it goes to the icy silence of disunion. All the warm feelings and affection have evaporated in the heat of battle.

Now while every situation in life is not quite so dramatic, there are still hundreds of ways we make little divisions in our relationships every day. A sharp word spoken in frustration to our spouse, children, co-worker or neighbor plants a seed of division. That seed gets watered by circumstance and begins to grow into something really significant, which scatters other seeds of disunion. And the rift between us grows and grows. Hopefully at some time -- earlier is definitely better than later -- we become aware of what is happening.

We could begin to amass our justifications and rationalizations, find some allies, hunker down for some siege warfare, and wait for the other person to make the first move. After all, we are the offended party here! Right?!

Or we could order the birthday cake.

We could humble ourselves, seek the help we need (talk to a server or two!) to do the right thing and then initiate the process of reconciliation. We need to own our part, ask for forgiveness, seek to understand how we got to where we are without blaming and shaming, commit to greater awareness and sensitivity to what triggers those responses and then begin to restore the sweetness of union and fellowship in prayer and thankfulness.

This may not happen as quickly as sharing a piece of cake, but the time it takes to restore a relationship is not nearly as important as taking the initiative to get the process started. It is said that the best time to plant a tree is twenty years ago, the next best time is now. The same is true for restoring the breaches between us, no matter how small or seemingly insignificant...

Now is the time to take the first step and order the birthday cake!